In this project (2012.Miller.etal.cortical.myelin.human.chimp_fulltext+SI), published in the Proceedings of the National Academy of Sciences (2012), we explored the question of whether or not the human brain is unique. We used stereological principles to quantitatively study the anatomy of the human and chimpanzee brain in four different places of the cerebral cortex during the course of development. 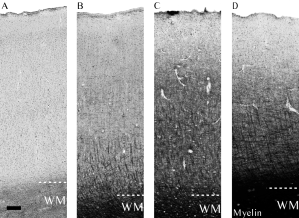 We found that these brain areas develop over a longer period of time in the human compared to our closest living genetic relative, the chimpanzee. In particular, we found that brain areas with relatively more “simple” functions are structurally mature during or around the time of puberty in chimpanzees, whereas these same areas in the human are not similarly mature until well after puberty (around 30 years of age).

The importance of these data is to suggest that what may contribute to humans being “smarter” than other organisms on the planet has a lot to do with an interplay between “nature + nurture” during a long period of neurobiological development.